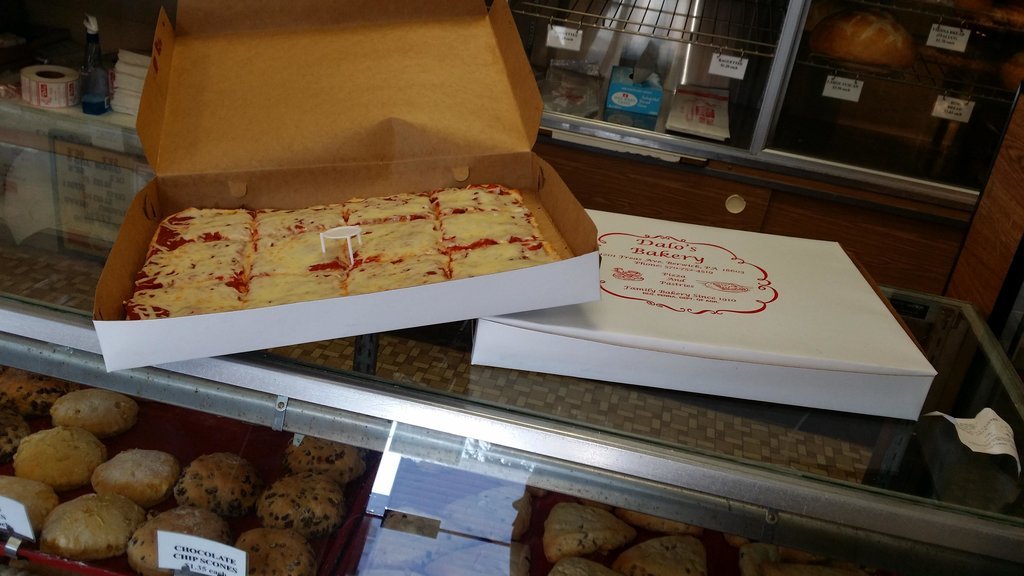 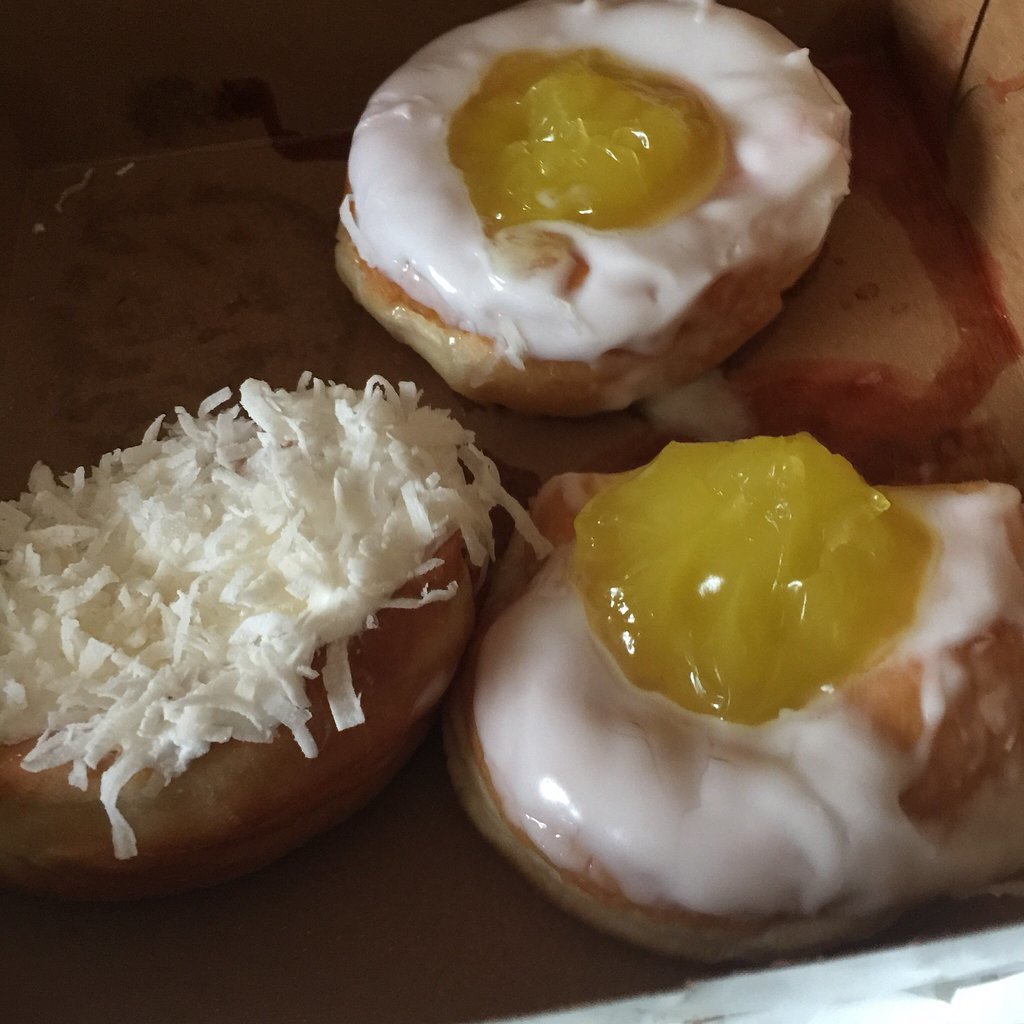 How much is a 10 inch cake from dalos

Depends on what you want on it. I know an 8"cake with special filling is about $21

Do they still make Easter Bread and can I get one shipped to MO?

I'm sure that they still make the Easter bread. You would have to contact bakery directly in regards to shipping. Good luck

Do you ship your baked goods? Love the pumpkin muffins and can't get anything like them in Hanover Pa

They do not ship their products that I am aware of but maybe you can call them and ask if they could do that due to the upcoming holidays. They might...

Do you ship your products?

Not that i know of

will u have fresh donuts this morning

Everything is made fresh daily.

They do a real good job on there cakes. They did a good photo of Elvis for the cake. They got other good tasting pastries there. The employees are really nice and helpful

Another great birthday cake by Mr. Paul Dalo! Thank you!!!

Loved it. I always spend too much but it's worth it!

Dalos baked goods are ALWAYS great tasting. Our daughter lives away & her one request was.."Mom Please bring me a Dalos cake * pizza for my birthday!" 🎈🎂

This was my first visit here. I'm speechless. Oh my! Incredibly delicious! 😀

Everytime we go to berwick we stop in and grab some dalos. But iam. Tuzzies guy 😁

Soooooooo good ! Not only are the baked goods delicious but the Pizza is awesome too ! You can't go wrong here, it's all good !

Good pizza n bread. Desserts need more flavor for my taste. Not bad just wishing a stronger flavor w custards. Not used to peanuts on my cannolis. Will look for no nuts on my 2nd stop. Employee lady was fabulous, helpful n happy. Loved that too.

My daughter loves there pizza and I love there filled cookies

Best bakery around and always use this bakery for all of our birthdays. They made an error one time and one time only and they not only apologized but on our next birthday a month later they provided us with a free cake to make up for the mistake. They took ownership of the error and they gained a loyal customer.

Dalo's Bakery is the best Ive been to. Their pastries are out of this world! Made with love for sure! Their Pizza is excellent and every time I am in the Berwick Area, I always think shout Dalo's Bakery. Prices are acceptable and they always offer the best service. I had a cake made by them, and it was just as good as their pastries. Especially their Baklava is so good. Never had it before, but I have always wanted to try it. Their Baklava is the only one I will eat! Highly recommended for pizza or pastries or a cake!

Only the best bakery in the berwick area. They got a lot of selection bake goods. Fresh breads in the AM. Prices are great. They accept credit cards. Parking available. I go here all the time to get all the goods for work. I'm fat in the inside because of this place.

One of my favorite pizzas! You can eat it hot or cold and it is delicious either way. A staple of Berwick!

Should not visit but cannot help myself. Bakery bliss. Good prices and fresh.

Love there pizza and the bakery has great choices

Always so helpful and kind on the phone. Never disappointed. CAKES ARE BEAUTIFUL AND MOIST. THE ICING IS BY FAR THE BEST! CREAMY AND SMOOTH. If it's not Dalos it's not good. Staff is so patient and helpful . Always worth the trip. Price is much cheaper than any other bakery around and they give you a large amount.

They got the best stuff everything is delicious

Could eat this pizza everyday!! Been a staple in my family for over 40 yrs always fresh always the best!!!

Wonderful selection of breads, pastries, cookies and pizza. Highly recommend, get there early.

Makes wonderful birthday cakes been getting them there for 9 years.

Bought a dozen donuts at 8 in the morning and they turned out to be the worst donuts I've ever had. They were not only dry but they were hard like a rock. They were definitely not fresh as the lady said. Curry donuts has way better donuts than dalos and that says alot.

Hands down best bakery north of philly and south of ny... could actually compete in both cities

Absolutely amazing bakery. Been going since I was a kid. Best cakes, and donuts ever. Like family. If you are in berwick this is a must.

Best selection of amazing pastries anywhere! Generations of experience is in the taste!

Great donuts! I really liked the chocolate iced with peanuts. Definitely going to try more and see what's up with that pizza.

Yummy pizza and the best doughnuts in Columbia county!

Always a great selection of pastries and they are always delicious!

Love me some Dalos , Wish they had Dalos in Ga.

Omg I am in love with the pizza , and all the goodies I have had , I am new to the town of Berwick , but this place will be a weekly stop

Luscious! Delectable! And affordable too!This was a last minute thing when our original bakery backed out a week before the event. So glad they did or we wouldnt have found this palace of yumminess!

Grew up loving their pizza.

The best bread and rolls, anywhere. Crusty on the outside and soft inside. Pastries are all delicious.Pizza hasn't changed in years, always consistently made and baked to perfection. Love this Bakery!

After picking a variety of pasteries, everything except the tiramasu was terrible. The jelly filled donut was jello filled. The custard filled donut, Bismark, and eclair tasted a bit spur and aged. The apple Danish tasted as though the dough was yesterday's. The eclairs were hard as rocks. The zeppoli was extremely hard as well and could be a biscuit. The cannoli did not taste as though they were even yesterday's... More like several yesterday's ago. Over all.... It is a waste of money... Very, VERY angry.

I don't know what the attraction is. Pizza is popular in the area but certainly not with me. Tastes like white bread with ketchup for sauce topped with American cheese. Disgusting to most people who are not local, but the local residents love and rave about it. Some of the baked goods are okay. I won't ever get a pizza there. Staff was friendly but that doesn't make up for the pizza.

Cakes, cookies, pies, bread. What's not to love. All made fresh every day

Your question has been sent.

Your review has been submitted.

Want to order over the phone?

Thank you for being with us!

We will call you back!